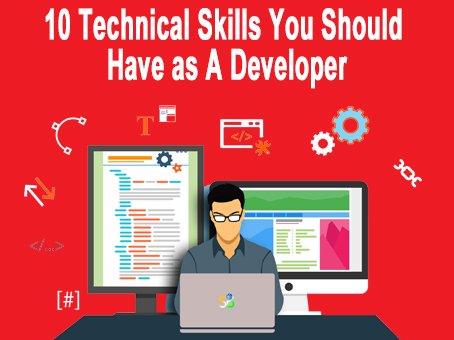 Technology is an extremely vast subject and there are many languages and tools with which a developer is supposed to work. A developer could be just beginning his/her career or could be well established in his/her field, he/she is still supposed to know the tricks of their trade. We have made a list of 10 technical skill-sets that every kind of developer must possess. Check out the list below and see for yourself, how proficient of a developer you are!

The pre-requisite of becoming a good developer is to first understand the data in front of you and the ways you can structure the data so that it becomes useful. This is the reason that a developer needs to have a good grasp of data structure & algorithms. It is important to know this because they form the base of learning any programming language. If you are good at organizing data, you will write short & meaningful codes (a blessing for any developer!)

The very first step towards becoming an established developer is to learn about text editing. All the developers use text editing, at some point in their career. It is an essential tool for all programmers, especially if they are at the start of their careers. The developer will also need to learn some keyboard shortcuts so that he/she becomes much more productive. Some of the text editors you can use as a developer are Notepad++, Atom, Brackets, Visual Code, etc.

There is 4-5 basic computer programming language that every developer should know; however, one will need to know a particular language in detail, depending upon the job requirement. Some basic languages are Java, Python, Mena, Ruby, and C#/.Net, which are always in demand. If you are interested in learning a language, then you can take a professional course available on various online learning platforms.

Source control is all about managing your written codes and their proper storage. There is a tremendous demand for people who are excellent at version control and can communicate & work with other team members about version control. A good developer needs to have a good grasp on version control tools such as Git, SVN, Mercurial, etc. Learn/polish new skills and upgrade your career with udemy, also use the offers codes & discount deals, and save on your purchase.

Any developer needs to know the basics of networking because around 70-80% of applications work on a client-server model. This is the model where the application is stored on the server and the client accesses the application from a remote location. When a developer knows about networking, he/she will be able to develop and support any application in a better way.

A developer should be adept with database management, right from recording & creating data to updating & deleting it. Database management is also about ensuring that important company information is stored in a secured space and is duly backed up. This is the reason that any company wants a developer, that also knows database management. SQL is one popular database that is used by many developers. Some of the databases that you can work with are Oracle, MongoDB, Redis, etc.

Any software or an application is not launched directly into the market; the software/ application is first tested several times. Testing is a very important step towards developing an application/ software. There are many kinds of testing methods that a developer can use; however, there are three primary methods that are used commonly. These three are Unit Testing, Integration Testing and System Testing. A good developer knows all three methods of testing a software/ application.

Every developer installs an encrypted key for a software/ application when the product is developed for a client. This encrypted key ensures that there are no threats to the software/application. This is the reason that a developer should know about encryption and cryptography in detail. There are basically two kinds of keys, private & public. Usage of the particular key is up to the developer’s discretion & the demand of the project.